The days of summer are here! Getting Maddox to sit still for his treatments are becoming more and more of a chore for all of us. I mean, who wouldn’t want to be outside playing baseball, throwing water balloons, playing in the sandbox, casting his fishing pole, blowing bubbles, riding his bike, etc. As the days are warm, the chances for doing his vest outside are slim as the vest does a good job of warming a person up so we are stuck inside the house.

For the last week, Maddox’s was on a coloring kick until one day we had a good day that he went on the potty for most of the day and he was given a present of a Nerf gun. Then Maddox realized that the more he went on the potty, the more presents and Nick jumped on this trend and found some guns and darts for super cheap and before you know it we have a ton!

So why not have target practice with his Nerf guns this afternoon? Nick even took the time to talk to Maddox about range safety and not to shoot when the targets were being reset, but they liked to shoot at me anyways. This may be a flash in the pan of keeping his attention during his treatments but it helps us get through these treatments as quick as we can. And as far as the potty training update, we’re getting there. It’s definitely an interesting adventure for sure.  #myhero 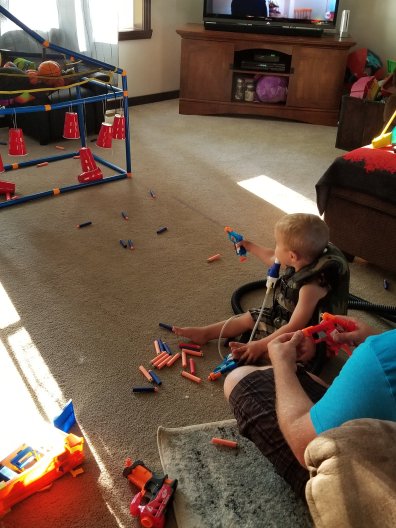