He’s a stuffed bear that’s blue and this bear has been through a lot already in the 8 months we’ve had him, but never ceases to amaze us on what this little bear can do, seriously.

This bear is the one I bought when I was out in Washington DC for SHRM. I was walking along with the girls and kept telling them that I couldn’t leave unless I got Maddox something. I walk in the typical souvenir store. We know these stores all to well; the musty stale air, the glass shelves of shot glasses and coffee mugs. The 80’s style shirt colors hanging on the wall and the one style you like is in either XS or 5XL. Don’t forget the $5.00 bottle of water too. It’s late, its the last store and the girls are annoyed that I can’t find anything. All hope was lost as I was walking out of the store when this shelf on the bottom had bears. They had the typical black and brown bears but way in the back was this blue bear. In the back of my head is the struggle of a mom; man he already has so many bears but the choice was made and he was added to the family.

When this bear came home, he had some stiff competition to Brown bear, Fred bear, Spot, Max, Monkey, Pooh bear, Moose, Baby, Daddy’s doggy, Packer bear, Go Pack Go bear, and Horsey. Blue bear wasn’t always the favorite but was always in the mix somewhere. I honestly think the attachment came right before he got sick with Strep the first time. Blue Bear just happened to be in his arms one night and we were struggling to have Maddox take his liquid medicine. The idea popped in my head that Maddox had to give Blue Bear his medicine as he was sick too! From there the attachment struck.

It’s interesting to watch a child and how their minds and instincts work. Maddox can pick up Blue Bear from anywhere, will know how to flip him so that he can rub the back of his hand over Blue Bear eyes. I’m thinking its what he does at night when he talks to Blue Bear as he knows where he is and it’s his security comfort sensation. How do I know this? I did the same type of thing when I was a kid to my attachment. I had my ‘blankie’ and had to two patches that had pilled and I used to rub my fingers over that as a soothing thought pattern. (weird, right? I still have my ‘blankie’ safe in my cedar chest) I was so mad when mom sewed over these patches. LOL.

This comfort has been a help so far in our ‘terrible twos’. Maddox is still trying to understand the world and then push us on what he can and can’t get away with. We have been firm with him on certain things and he has his breakdown. We suggest, ‘Maddox go get Blue Bear and give him a hug’. As I mentioned earlier, it’s just enough of a distraction for him to flip his mind to something else, has a piece of comfort and he’s right back to himself (or at least quicker). I’m not really sure if this is the best course of action, but it’s helping cut these breakdowns to a short timeframe and we have an option as a parent for him that he understands.

Blue Bear has been with us a short while and we’ve had some close calls, but we are quickly catching on that Blue Bear needs to guard the car so that we can leave. In all reality – so we don’t lose him when we are out in public. :S Every parent’s worst nightmare, right? He’s starting to show his age and had to go through plastic surgery already with a few more areas that will need to be addressed if PT doesn’t work. He’s such a unique friend that I’m going to have to get creative on how to wash this poor guy as he is so fragile, he won’t survive the washer and dryer already :S.

O Blue Bear, you’re off to a great start and we have plenty of friends as back up if you ever need a break. But I am thinking you’re going to be in it for the long haul. 🙂 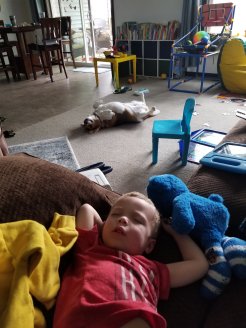 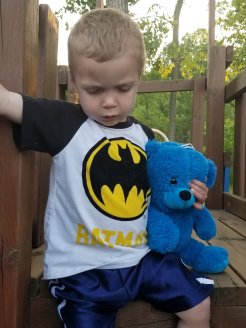 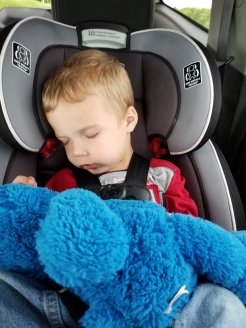 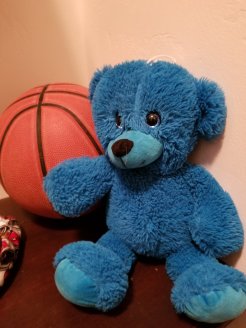 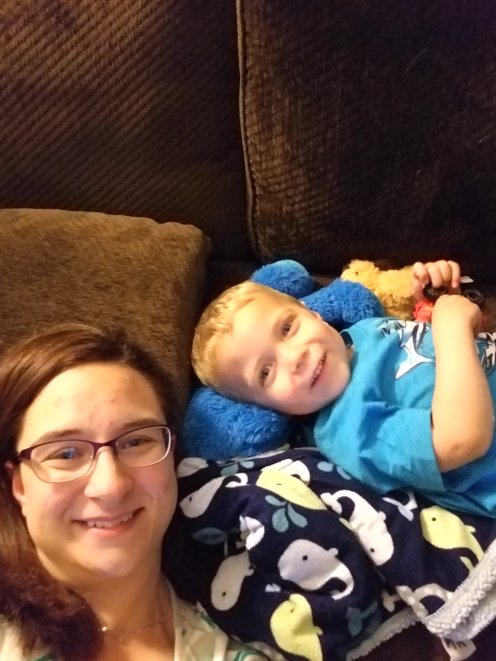 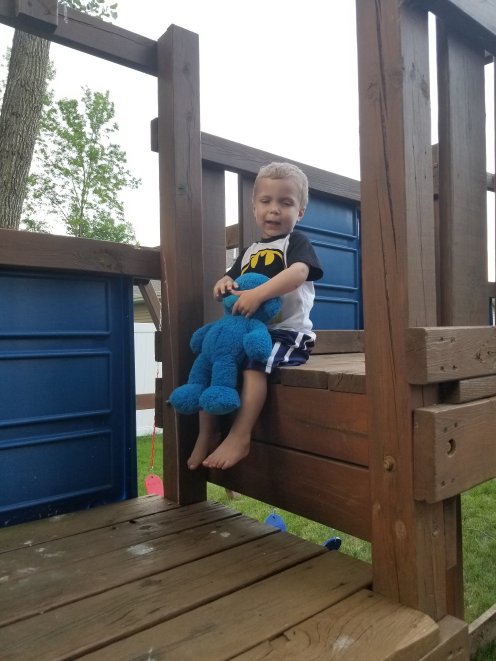